Officially, in total, I've spent the past 24 days solo backpacking now that I've returned safe and sound to Bader Hall and the Castle. I started writing a little bit of this post out on my 7 hour train ride from Budapest to Munich, but now that I'm back at university, I'm hoping to get out the majority of these posts written and done as soon as possible. It was just impossible for me to have good computer access, as I was living off one backpack (no laptop, not much else but essentials).

Summary of my trip though? I've seen ridiculously iconic sights like Barcelona's Sagrada Familia and Rome's Colosseum! I've tasted amazing Italian pasta/gelato and gulped down Hungarian palinka. I've met some awesome people along the way, like Sergio and Imaad in Barcelona, Sonia and Gus in Rome, Szonja and Peter in Budapest, Jare and Sejin (?) in Munich, and the Yerby family in Amsterdam! Sometimes I was a little annoyed with myself for not pushing myself to explore enough, but I came to terms with it because it's my break and I also do need to rest in order to not burn out. But all in all? Solo travelling has taught me quite a bit! (Let the cheesiness commence...) I know now that I can successfully navigate foreign cities via their public transportation systems, even if I don't speak any of the native languages. I want to have a basic understanding and speaking ability in as many languages as possible, so that at least I can try to use the language as much as possible. My favourite cities of my trip (Barcelona, Rome, Budapest, Munich, Amsterdam, Glasgow) were Barcelona and Budapest... I'll try my best to explain in the individual posts. Haha, so that's the very very brief summary. Now onwards to the actual interesting stuff, aka what I did during my trip!

I left Annie's place in Brighton where I stayed a night (thank you again) at 8am, to catch my 12:15 flight to Barcelona! On my flight, I made friends with a guy named Callum and thus planned to meet up later that evening and walk around Barcelona for the first time, after a few hours of settling in.

From the first glimpse of Barcelona out the window of the shuttle bus from the airport, I was ABSOLUTELY captivated; it was so pretty. I really do hope my pictures do it justice. The shuttle bus from the airport is quite nice and not that expensive, but if you just look up public transportation beforehand, the normal public buses are cheaper and not that much harder as long as you know where to get on and off. 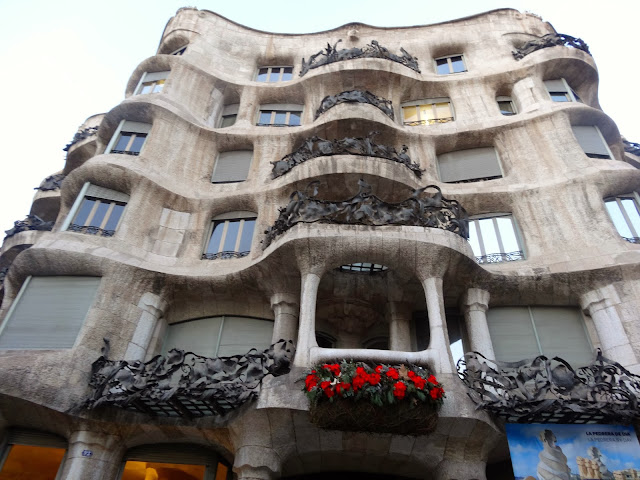 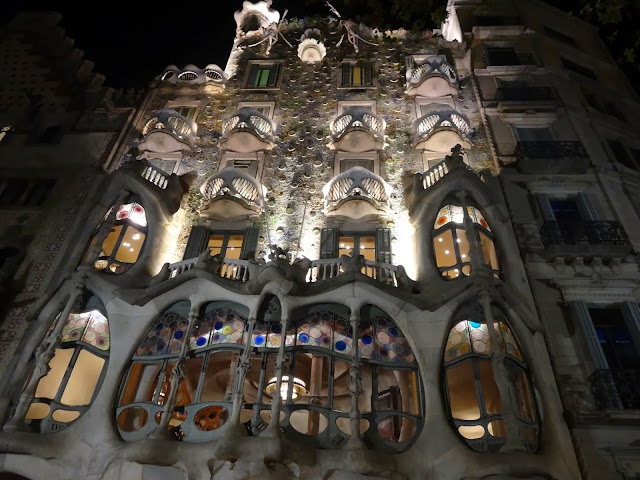 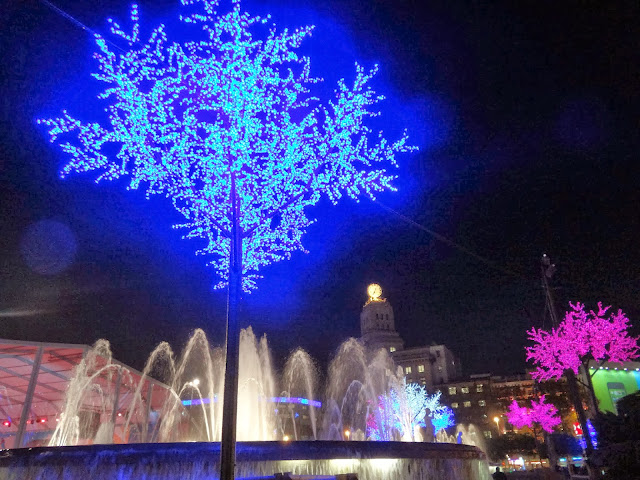 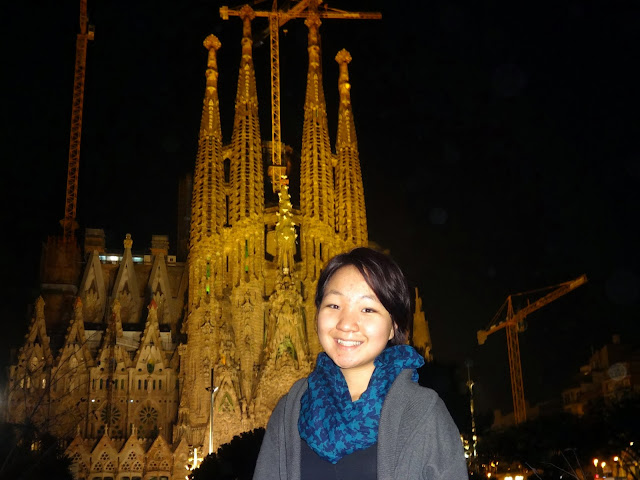 We mostly walked around to get a feel of the downtown city centre and we eventually found ourselves at the Sagrada Familia. Our schedules didn't match up for the rest of Barcelona, but as my first friend along my travels, thank you Callum!

Today I visited Parc Guell, and did not too much else. Getting adjusted to being up early and sight seeing took a lot of will power, as I spent quite a few days before my backpacking adventure relaxing after university exams by watching Breaking Bad on Netflix...

I left my hostel in the morning and came back at around 3-4pm. I originally planned to arrive in Barcelona on the 13th actually, so I could do London for a day or two beforehand, but due to cheaper flights on Thursdays than Fridays, I booked a different hostel for the first night than the rest of the trip (sorry for not taking pictures of any hostels on my trip oops...). But Sant Jordi Diagonal was a lovely place to stay my first night in Barcelona and it has my full recommendation as a hostel to stay in if you're visiting Barcelona. Even though I was only there for one night, they invited me on their pub outings for the rest of the trip (which I kind of wished I took up, oh well!).

Anyway, PARC GUELL ah. It is a bit far away from the city centre, and costs 8 euros to get in, but is totally worth it! It was so lovely! Even in mid-December, the weather was so nice (15 degrees Celsius) and on a gorgeous sunny day, it's perfect to stroll around in. I met Daphna (from Germany) there and we spent some many hours exploring and getting lost. Honestly, the entire Parc is gorgeous and the forest areas above it are also amazing. 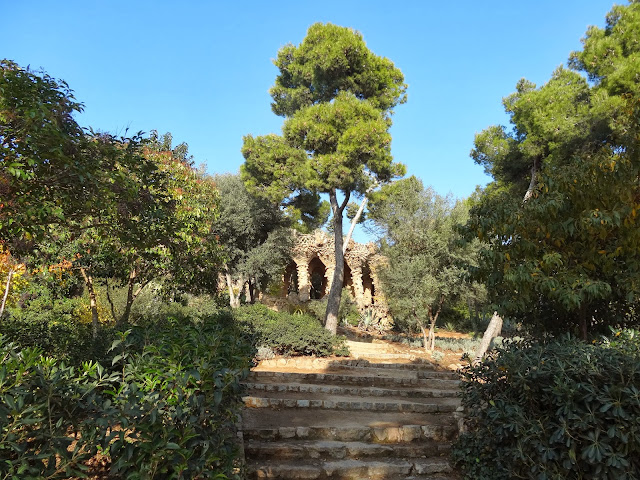 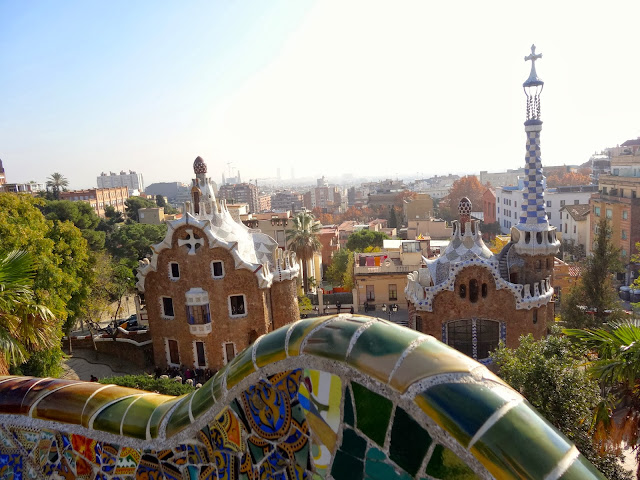 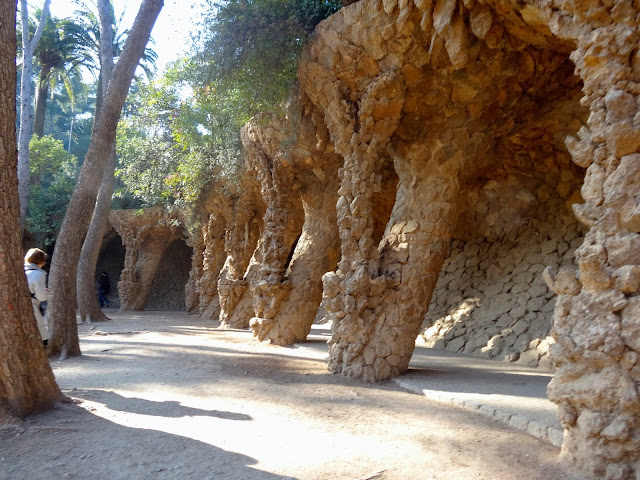 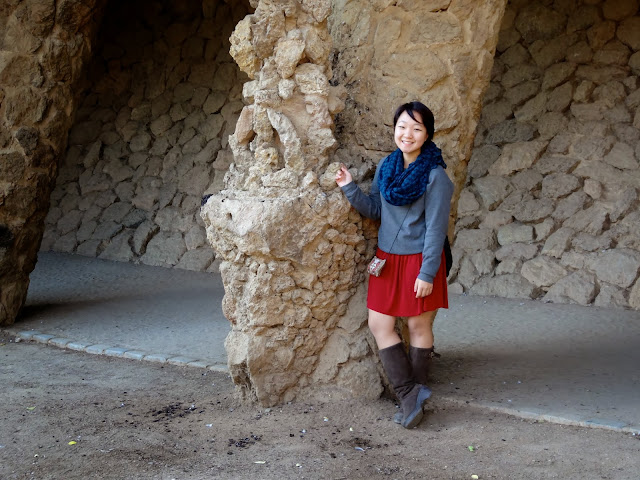 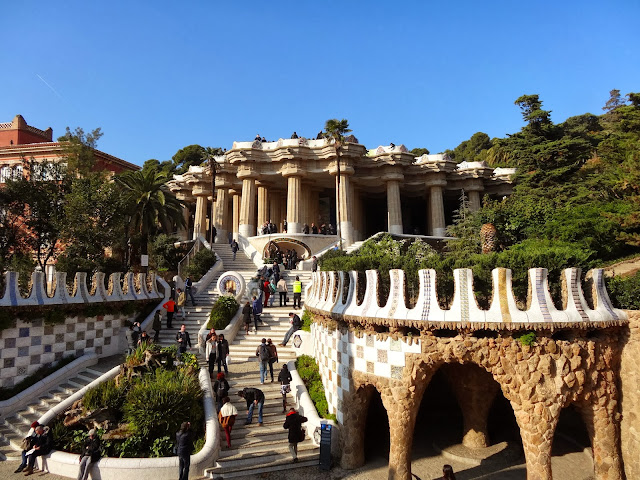 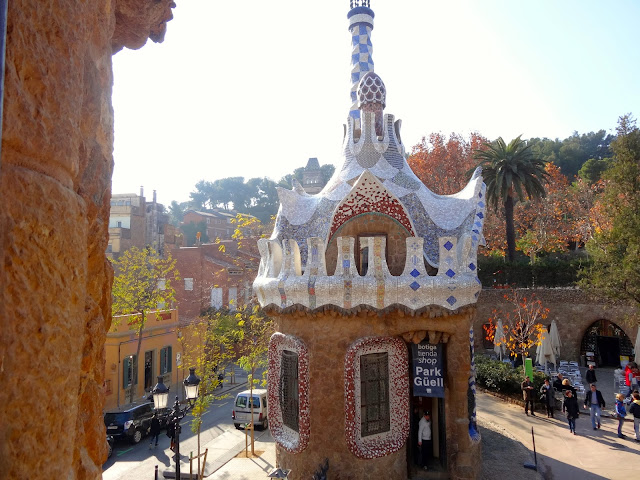 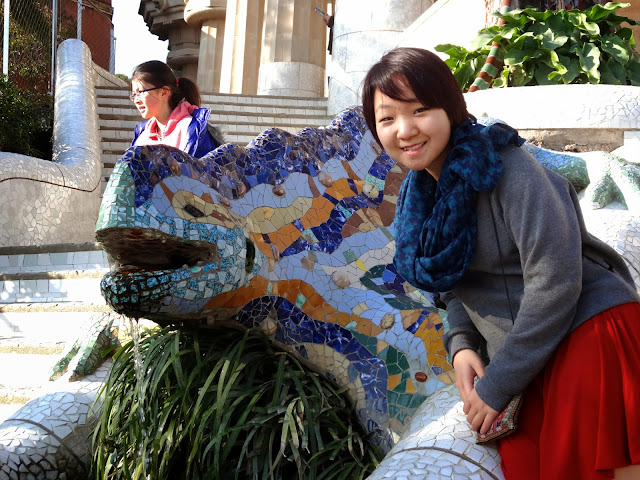 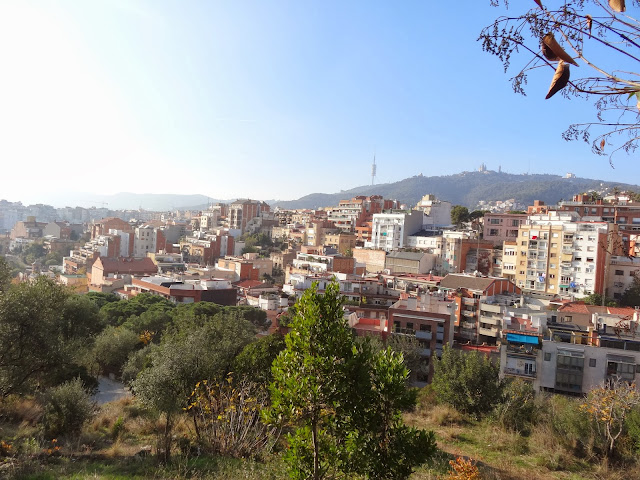 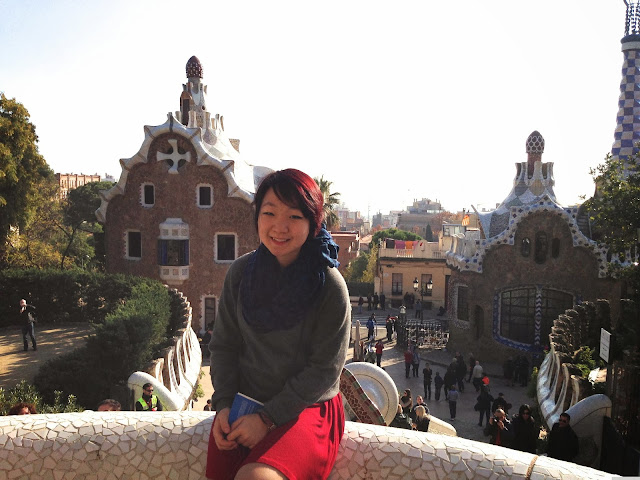 I instagrammed a photo as well. Yes, if you followed me on instagram, you got live travel updates. Worthwhile! @flyingdee But anyway, here is one of the two pictures I squished together for instagram. 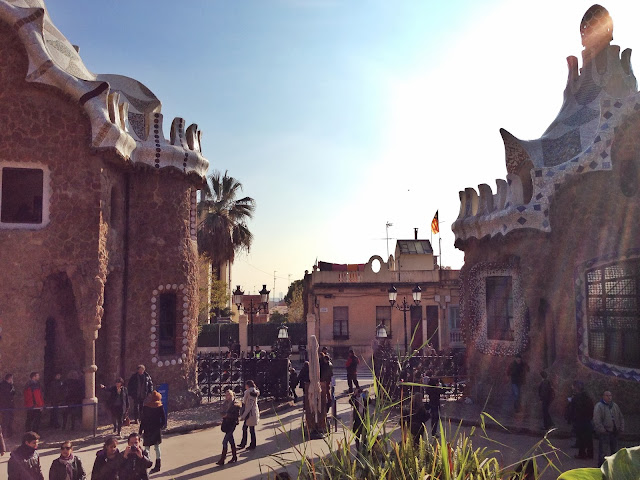 Leaving Parc Guell, we stumbled upon a community garden (I love that I keep finding them! So awesome!). 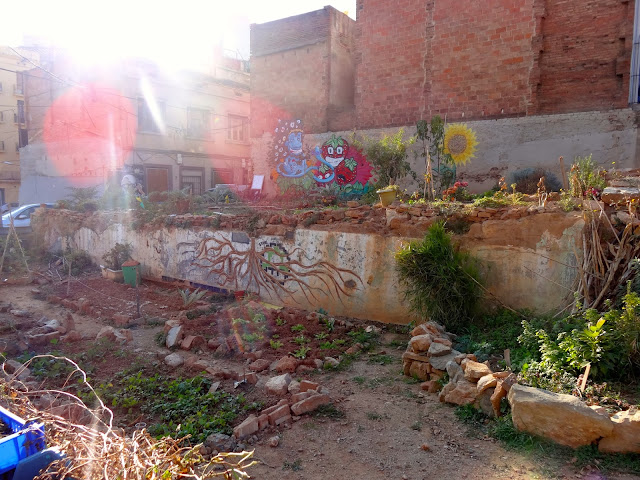 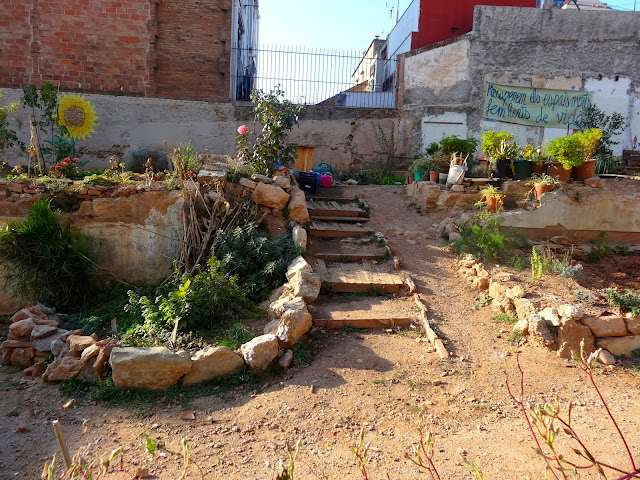 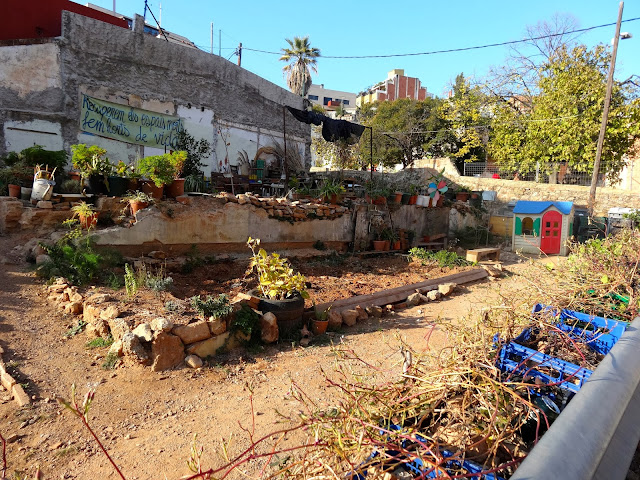 I was supposed to go to dinner with Daphna and her friend, but I bailed (awful of me, I know, sorry again Daphna 1000x if you're reading this!). I have no excuse really, I was just tired and lazy... but this is why I gave myself several days to sightsee slowly. Hats off to you if you can enjoy the rush of speed travelling, like my friends Carrie (check out her travel tumblr blog here) and Lia! For me personally, I'm glad that I budgeted a fair amount of time in each city I went to and probably could have added even a day or so more to some of the cities without hesitation.

My travel advice: travel slowly. You never know when you'll be back in a city again, so breathe in the environment and sightsee as if you'll never return to the city again (because what are the odds? There are so many other places in the world to explore for the first time!). That's my philosophy, I suppose. Haha, get used to these silly cheesy wisdoms from me...

Anyway, I promise to try my best to get the rest of my adventure up. I'm hoping to do a post a day or so, for the next week and a bit. Wish me luck!

Now to socialize with the new upper years and catch up with the castle friends because we're back in the UK and ready to take on a new adventure: 2nd term of first year of university!