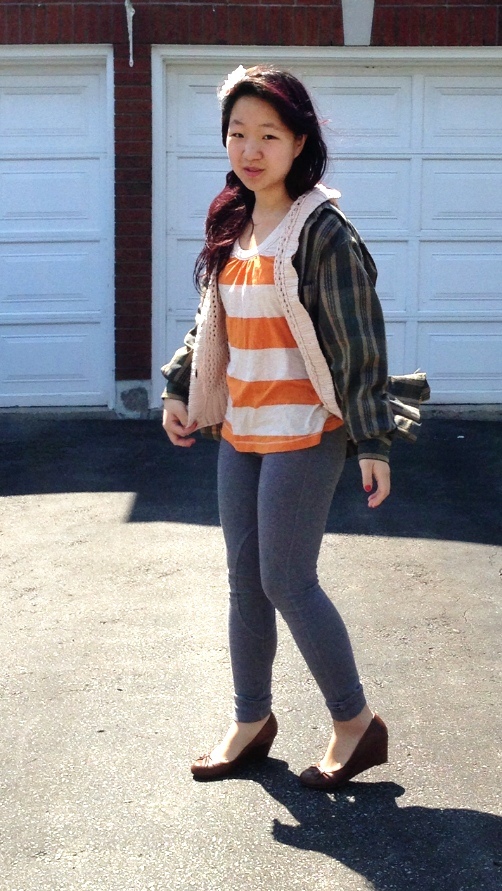 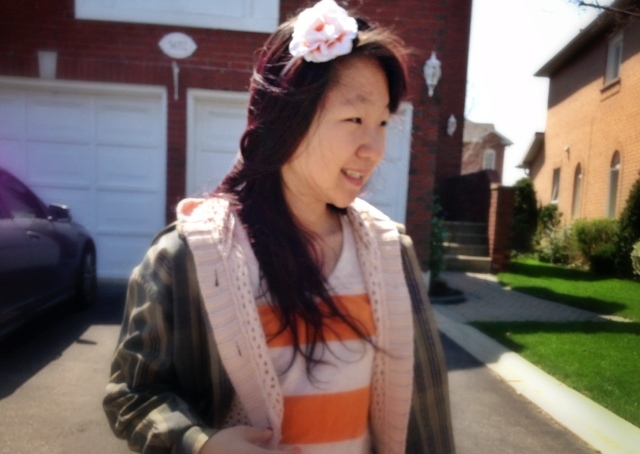 
Jeggings - hand me down, the tag says Made in Portugal
Shoes - Spring / Headband - Claire's

It was a lovely, beautiful sunny day outside today. Even though I only got to experience it in the couple of minutes I forced my brother to take pictures of me, it was nice to know that spring and sunshine is on its way! Bold stripes are also a spring 2013 trend!

I knew the weather outside was going to be decent: 17 degrees Celsius; I also knew that I was going to spend the majority of my day (1pm - 9pm) at the library. The library is often colder than I'd prefer, and I often forget this fact - thus ending up studying there in a t-shirt and hoodie. The t-shirt is much too chilly! The hoodie becomes too warm after a certain bit of time! So instead of having to constantly alternate, I decided on smart layers today!


The inner most layer is a long sleeve shirt, which was a great base because it didn't add bulkiness to the outfit. The middle layer was a crochet cardigan/hooded sweater thing. With just a t-shirt under it, it's not warm enough because of the holes. A long sleeve though is kind of alright enough to be warm enough, but the dress shirt layer on top makes the middle layer act like an insulation layer!

Lastly, my ten year old brother is likely going to be my photographer most of the time - if not the friends I harass during school - but either way, I've realized that it's best to get them to take as many pictures as possible. The iPhone 5 camera quality is fantastic, as far as phones go. However, half of the pictures are likely to be blurry, out of focus, tilted, or just plain awkward (although that's my fault). Snapseed is a great app to edit iPhone pictures, albeit a little hard to get used to. Thanks to my friend Zona for introducing me to it; check out her photography blog.

Happy studying y'all IB kids, and don't despair too much at not being able to enjoy the outdoors - it'll only get warmer by the time we're done exams! To everyone else, have a lovely week!